Posted at 19:47h in Activities by Leisman
0 Likes

At Sousaki, near Agioi Theodori of Corinthia, lies hidden a little treasure that only a few know about. It is a volcano that belongs to the same volcanic arc as the volcanoes of Methana, Aegina, Poros, Nisyros and Santorini.

Live with us the unique experience of taking a tour of the gorges of that volcano.

It is located at an altitude of 180 m, and although its last volcanic activity occurred 2.7 million years ago, there is still intense post-volcanic activity with emission of hot gases, mostly carbon dioxide, methane and hydrogen sulfide.

See closely the various adits, where sulfur mining used to take place. In many spots the ground is warm while in others all it takes is digging with the finger a few centimeters into the ground to feel the hot gases emerging from the slopes of the volcano. In the vents of the many adits (natural and artificial) existing in the area, often dead insects and birds are found, killed by poison gas. Depending on the season water may be running in the gorges. 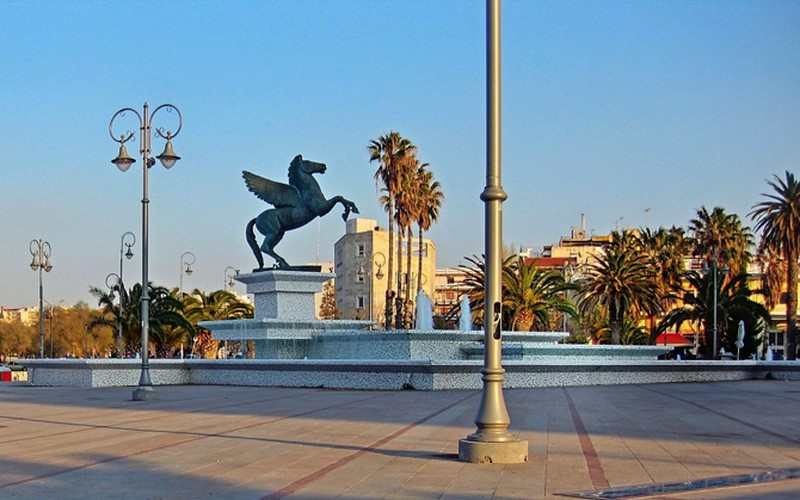 The new city of Corinth was built, in order to continue the history of the ancient city, in the most central spot of the Corinthian Gulf. The port, which has been upgraded the last years, hosts cruise ships, private yachts and sailboats.

The access to Corinth is either by car or train, via the Athens Suburban Railway (a line that connects Corinth to the center of Athens and the airport) or by busses connecting the city with various destinations both in the Peloponnese and the rest of Greece.

It has the largest market in the region with many shops and products and a newly established modern mall. Downtown you can drink your coffee, go shopping, enjoy delicacies of traditional or modern cuisine or rent a bike and ride along the Corinthian Gulf enjoying the wonderful view.